In our previous post we talked about where coffee comes from and how its grown/ processed. In part 2, we’ll go into more detail about the individual farms that we buy from and the relationships from grower to exporter/ importer to roaster.

The majority of coffee we sell is to commercial customers – coffee shops and restaurants – and the majority of those customers sell coffee using their espresso machines. This, therefore, means that our signature espresso blend is the most popular and the coffees that make up this blend are what we buy most of. Our espresso blend contains four coffees – two from Brazil, one from Guatemala, and one from Mexico.

We first became aware of El Jaguar around 5 years ago through our friend Andreas. He worked for a green coffee exporter called InterAmerican based in Costa Rica. Gregg and Mark met him there on one of their first origin trips over a decade ago! He has since moved to Mexico and worked hard to improve the quality of specialty coffee in a number of areas. But probably his toughest project came in the Sierra Madre mountains, close to the border with Guatemala. The region is very remote and difficult to access. Growing conditions are perfect but processing the coffee after picking was always an issue with access to water/ fermentation tanks and adequate drying patios a problem. The average height for growing is around 2000masl – hence making mechanical harvesting impossible. Most of the farmers are also very small scale and produce a small amount of coffee each. To market the coffee better to foreign buyers, Andreas helped to set up what we now know as El Jaguar – basically a cooperative of growers from the region. Jaguars are known to roam through the coffee farms – hence the name! Jonny and Gregg visited the area in January 2018 and were amazed at the remoteness but also the outstanding beauty. We met a number of the farmers who dedicate their lives to growing our coffee and shared a meal with them at one of the washing stations. There are a number of varietals grown on the farms and when we first bought the coffee, the differing screen sizes made it tricky to get a consistent roast. After offering some feedback, Andreas and his team worked to ensure a more even screen size. The quality of the coffee in 2020 was outstanding. The flavour profile is of tangerine orange with vanilla and caramel and a medium body. This coffee cuts through the chocolate and body from our other coffees and adds some excellent acidity to the blend.

We also visited the local school in the area (Angel Diaz) where many of the farmers/ farm workers children attend. As part of our ongoing relationship with El Jaguar we bought uniforms, sports equipment and some literature for the school to use.

After our visit to Mexico in 2018 we made a short trip across the border into Guatemala.

Our base was the beautiful town of Antigua, surrounded by volcanic mountains and filled with lots of stunning old buildings, this area is practically coffee royalty! We were visiting a farm we had been buying from in the Acatenango region – directly underneath the Acatenango volcano (all of the coffee plants were covered in a fine layer of volcanic ash!)

We also met up with another friend – Julio Martinez – on the same trip. Julio operates a small export company called Idharbest and we had bought some coffee from him a few years back for use in our filter blend. He was keen to show us another side to Guatemala, away from the volcanic region that people associate with coffee from this country. About 90minutes drive from Antigua, in another valley, there is an area known as Mataquescuintla.

One of the main coffee growers in the region is Roberto Monterroso who owns the El Morito farm and washing station. We were keen to find a coffee that was bursting with chocolate and cocoa – Julio and Roberto promised us they would source this profile from the farm. We visited the patios/ dry mill and then had lunch in Robertos home. After spending this time getting to know him and seeing his coffee ‘operation’ first hand, we were keen to do business. He sent us a number of samples around 6 weeks later and after cupping we settled on one stand out coffee. The main varietal of our coffee is Pache which is a very hardy varietal grown above 2000masl, sometimes closer to 2400masl. At this altitude temperatures are cooler, allowing for a slower maturation of the cherry, meaning more acidity in the coffee and a very complex cup. This is the third year we’ve been buying El Morito and it’s getting better every year. The flavour profile is of milk chocolate with a cocoa/ dark chocolate aftertaste. Sweet throughout with a good body.

Founded on the 1st March 2007, this farm is owned by Raquel Ribeiro Aguiar Oliveria, having been inherited from her father Ronaldo de Castro Aguiar, a South Minas coffee grower since 1963. The cultivated area of this farm is 163.5 hectares, with altitudes above 1,000 metres and annual rainfall exceeding 1.500 mm. The greater part of the production is sold to buyers of specialty coffees (included us at Ristretto) There are currently 21 permanent staff. The owners live in harmony with the natural environment, preserving the woodlands and springwater catchments.

Harvesting takes place between June and September each year. Gregg visited the farm back in the summer of 2019 during harvest time – harvesting is carried out in two ways: mechanised, on 60% of the area, and the rest by stripping the branches manually, the cherries falling onto cloth to avoid contact with the ground. The coffee is taken to the washer and pulper. The pulped coffee cherry is taken to a paved drying-yard, where it is turned a number of times in accordance with quality-conscious procedures until drying is complete.  Once dry, it is placed in wooden bins where it stays for at least 30 days.  After this period it is hulled and transported to the Santo Antônio Estate Coffee warehouse facility where it is prepared to be exported. All the coffee we buy from Cerrado Grande is pulped natural. The farm produces approximately 35-40 bags of coffee (60kg) per hectare.

The cup profile is of milky chocolate, cocoa aftertaste and a medium body. This coffee forms a really good base for our espresso blend, but it’s also delicious on it’s own. We’ve found this year that the coffee is actually giving off some really pleasant acidity too.

Fazenda Londrina is one of four farms owned by the Naimeg group, a family business which was headed up by the late founder Gerson Naimeg. Gerson, the son of a German settler and Brazilian mother, established his first farm in 1965 when he bought a small plot of land in Uba located in northern Paraná. Like many others, he and his family moved to the Cerrado to avoid the annual threat of frost and now they have four farms in the region. Fazenda Londrina is around 394 hectares in size with 200 hectares set aside for coffee and is located near the city of Patos de Minas, at an altitude of approximately 1160 meters above sea level. The farm successfully grows varietals of Catuai, Icatu and Acaia on the local clay loam soils and harvesting is mechanical thanks to the flat lay of the land. Fazenda Londrina has won awards in national espresso competitions in recognition of its good character in the cup.

In line with Brazilian law, 20% of the land at Fazenda Londrina is given over to a nature reserve where indigenous plants provide a habitat for wildlife. This coupled with the social standards which have been established for the people that work the land, has led to Rainforest Alliance certification for the farm. Gregg also visited this farm in the summer of 2019 during harvest and was really impressed with how accurate the mechanical harvesters are at selecting only ripe cherries. This type of picking and processing is very different from the hands on techniques in central America. It certainly costs a lot more in terms of machinery but the costs are reduced by the small number of workers needed on the farm to operate the machinery.

In the cup you’ll get more milk chocolate, praline and caramel with a heavy body. Both Brazils are the foundation of our espresso blend and they lend themselves to each other well too.

So now you know a bit more about our four direct trade coffees. Those of you who regularly buy coffee from our website will know we sell many other coffees from various origins. We buy these mainly from trusted green coffee importers that we’ve been buying from for many years. Generally we get sent pre-shipment samples of new coffees coming in and Jonny will roast & cup them to see if there is anything we want to buy. We usually only purchase a single sack (60kg/69kg) of each coffee and then roast it until it’s gone! This ensures we never have anything left for very long and allows us to turn over many different and exciting coffees through the roastery. Most notably at the moment we have some really exceptional naturals from a young farmer called Diego Samuel Bermudez in Colombia and another from our own El Morito in Guatemala – providing us with a great contrast to the usual washed coffee we buy. We have also been buying from a relatively new green importer in Asia called Indochina who are introducing some exceptional Chinese/ Myanmar coffees to the western specialty market. The washed Banka coffee from China is proving really popular this year too.

We hope this sheds a bit more light on how and where we buy our coffee. We’d love to hear what you think about the coffees we sell and if there are any other origins you want us to buy from – just get in touch! 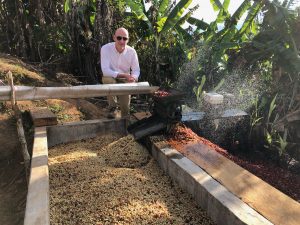 It doesn’t matter how good you are at roasting coffee, if your raw product isn’t already the highest quality, then your end product is never 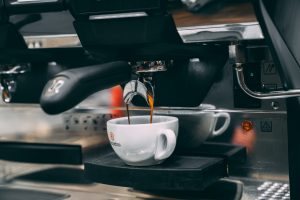 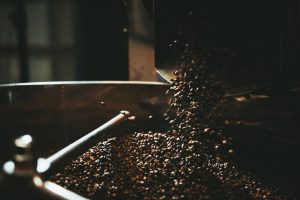 Investment for Growth and Jobs

Ristretto is in receipt of SFA Capital support from Invest NI for its investment and growth plans. This project which is part-financed by the European